Nydri Lefkada Villa with Sea View is located on the outskirts of the village of Nydri at the location of Fayias, at the east coast of Lefkada Island. The site offers an excellent panoramic view which covers the Ionian Sea, Nydri village, Scorpios Island of the Famous Magnate Shipping Onassis, Meganissi Island, and the Princess Islands.

The villa is located in a quiet and serene place with private road access. The house faces east, basking in the sun from dawn to dusk. The luxury villa has 4 en-suite bedrooms, a good-size living room with a fireplace, kitchen, and loft. The home is self-catering. The properties are located in a mountainous region which is perfect for those who like walking and hiking.

The villa is ideal for families, friends, couples who are looking for a relaxing holiday. There are plenty of activities in the surrounding area to see and to do during your stay in the villas.

Nydri Lefkada Villa with Sea View is situated on a plot of land 7800 sq m with 5500 sq m belongs to the Forest land. The actual habitable surface area is 194 sq m. This luxury home is a three-storey building and consists of 4 bedrooms, large living room with fireplace, dining-room, open kitchen, loft, storage room, veranda and balcony. The villa can accommodate up to 7 persons.

Nydri Lefkada Villa with Sea View benefits from its own private pools (separate for adults and children) and Jacuzzi. Leading from the living room is a spacious balcony with stunning panoramic sea views, which covers the Ionian sea, Nydri village, Vlycho Bay and the islands (Scorpios of Onassis, Meganissi and Ithaca – Odysseus Island), furnished with a table and chairs to enable you to dine al fresco.

The villa contains two double en-suite bedrooms, one twin en-suite bedded room and one single room, which is ideal for families, friends, couples who are looking for a relaxing holiday. There are plenty in the surrounding area to see and do during your stay.

Nydri Lefkada Villa with Sea View is located in Lefkada, Greece. Lefkada is one of the seven Ionian Islands, located in the Western part of Greece. It is the most accessible island in Greece as no ferry required getting in there and it is never cut off from the rest of the country. Lefkada is joined to the mainland by a swing bridge. The villas are situated 17km from Lefkada town, at Nydri village, at the location of Fayias. There are several buses leaving Lefkada for Nydri on a daily basis, every 30minutes. The journey takes approximately 20 minutes and the fare is 1.40€.

The island has been awarded the European Blue Flag for many of its beautiful beaches. A jewel in the Mediterranean and one of the most beautiful islands in Greece, Lefkada combines blue water beaches and dense vegetation all over the island. The island offers a wide variety of museums, castles, monasteries, waterfalls, caves, activities, sites of interest and birdwatching (flamingo).

The “Lefkas International Folklore Festival“ takes place during the last week of August. The Festival has promoted the message of peace, friendship and brotherhood among nations worldwide through its cultural and traditional folk forms in the art of music and dance. In the festival folk dance groups from the five continents reinforce, through their performances, the message of friendship, communication and cooperation. More than 600 groups have represented the folklore of almost 150 countries at the festival until today.

Nydri is the island’s biggest resort and has a lovely setting at the mouth of the long and impressive inlet of Vlycho bay. It is located on the island’s east coast, about 17km south of Lefkas Town. Local amenities, such as shops, super-markets, cafes and tavernas line the sea front of Nydri village and a large section of the beach has been used to build a new quay. Music bars and a couple of nightclubs open in the summer as well.

Beaches are found to the north of the town. They have great settings and marvellous views .The Sea is clean, shallow and calm. Nydri beach offers water sports such as water-skiing, water-bicycles and catamaran are available for rent. Sun beds, umbrellas and water sports facilities can be found there, as well as restaurants and bars.

Nydri village and gulf of vlichoNydri is a major yachting centre and boats always seem to fill the bay with the annual Ionian Regatta in late September one of the highlights of the Mediterranean sea. Ferries leave here daily for tours of the local islets and to the many secluded bays that lie along this part of the coast. The little port of Nydri offers daily services to the islands of Ithaca, Kefallonia and Meganissi.

Inland from Nydri the land is fairly flat and cycle rides through the olive groves are popular, with several good walking paths in the nearby hills. A trip to the Dimossari waterfall is worth a visit. The waterfalls, about 4km from Nydri, get more spectacular the higher you climb. Opposite Nydri village there is Scorpios Island of Famous Magnate Shipping Aristotle Onassis and Madouri Island of Greek poet, Aristotelis Valaoritis. 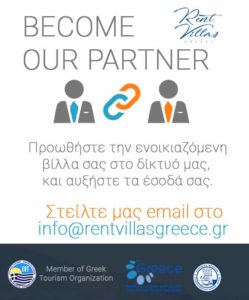